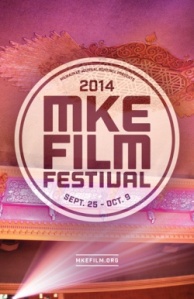 On top of that the stats on the number of guests up – an increase of 37% from last year.  A total of 113 out-of-town guests are confirmed.

“The opportunity for audience members to interact with the creators and stars of the films is one of the most unique aspects of the film festival experience. It adds a deeper level of connection and engagement between our audience and films, and that has always been one of our goals,” shares Jonathan Jackson, Artistic and Executive Director at Milwaukee Film.

Attending the festival and adding significantly to audience interaction are the directors and subjects for two of the year’s most critically acclaimed documentaries–Debra Granik’s Stray Dog and Marshall Curry’s Point and Shoot*** (See Program Note at end of blog).  Both Oscar-nominated filmmakers are scheduled to attend screenings and participate in question and answer sessions with their respective film’s subjects, Ron “Stray Dog” Hall, of Stray Dog, and Matthew VanDyke, of Point and Shoot.

Both Opening and Closing Night films boast a record number of guests and filmmakers. The riveting documentary opening the festival, 1971, screens with director Johanna Hamilton and four film subjects in attendance, and will include an extended question and answer session following the film.

I have a special place in my heart for the Milwaukee-made Closing Night film, The Surface. It celebrates its world premiere at the Milwaukee Film Festival, with cast, crew, and star of the film, Sean Astin of The Lord of the Rings, Rudy, and The Goonies fame. Director Gil Cates, Jr.*** (special program note see info at bottom) writer, producer, and Milwaukee native, Jeff Gendelman, cinematographer and co-producer, Jimmy Sammarco, and actors Astin, Chris Mulkey (Captain Phillips, First Blood), and Megan Lorie will also be in attendance.

The extensive list of scheduled guests also includes at least one guest for each film in the festival’s new Black Lens program, including Robert Townsend, director, writer, and star of the 1987 classic comedy, Hollywood Shuffle, for a total of ten Black Lens guests.

For the first time since launching its Passport program, Milwaukee Film has secured a filmmaker for this program. Passport: Mexico director Rodrigo Reyes (Purgatorio: A Journey Into the Heart of the Border) is scheduled to attend the festival.

FILMS SCHEDULED TO APPEAR AT THE 2014 MILWAUKEE FILM FESTIVAL:

All in the Family
Sam Macon: Director Jessamy Meyer: Editor

To See What You Can Do
Jack Davidson: Director

This is Jackie.
Anna Sampers: Director

To Hold In The Heart
Pang Her: Director Jean Yang: Camera

Wake Up and Pay Attention
Youth from the Daniels-Mardak Boys & Girls Clubs of Greater Milwaukee: Directors

Purgatorio: A Journey Into the Heart of the Border
Sep. 27, 2:15PM Downer Theatre
Rodrigo Reyes: Director

Take Me to the River
Attendance Dates TBD

This May Be the Last Time
Oct. 4, 4:15PM | Oriental Theatre
Sterlin Harjo: Director

Through a Lens Darkly: Black Photographers and the Emergence of a People
Oct. 9, 7:30PM | Oriental Theatre
Don Perry: Co-Producer, Co-Writer

Laurie Scheer: The Writer’s Advantage: A Toolkit for Mastering Your Genre (2014)

I will see you there! Be sure to come up and say hello. Enjoy the festival and all these wonderful activities and guests.

*** Special Program Note: Debra Granik is guest on Rex Sikes’ Movie Beat Wednesday Sept 24, 2014 3pE 12pC NoonP. Join us for our live discussion, chat will be open too. Show will be archived and available 24/7 to listen if you are unable to listen live. For more info click the bolded link:

*** Special Program Note: Gil Cates Jr Director Producer is guest on Rex Sikes’ Movie Beat Thursday Sept 25, 2014 11aE 10aC 8aP. Join us for our live discussion, chat will be open too. Show will be archived and available 24/7 to listen if you are unable to listen live. For more info click the bolded link:

Festival begins September 25, the date of this discussion with Gil Cates Jr. Enjoy