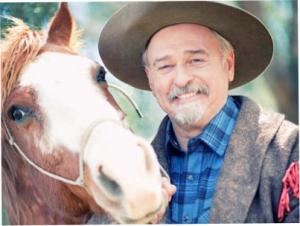 Peter Sherayko, Actor, and owner of Caravan West a supplier of  horses, tack, artillery, costumes, props, Prod. Designer, Art Director, Prop Master, Wranglers, and Sets for movies. Peter portrayed cowboy Texas Jack Vermillion in Tombstone staring Kurt Russell, Val Kilmer, Sam Elliott, Bill Paxton, Powers Boothe and Michael Biehn. He worked as the film’s technical advisor and is the head of The Buckaroos, a group of specialized western background performers. On Tombstone, as well as other movies. Peter and The Buckaroos provide horses, guns, props, extras, experience and equipment for many of the cowboy scenes.

Peter played ‘Farley’ in ‘Yellow Rock’ a feature film we have been discussing in some depth on Movie Beat. “Yellow Rock’ stars Michael Biehn, James Russo, and the film’s writer and producer Lenore Andriel,

Peter created his company to bring quality to the Hollywood Western and provide today’s demanding film audience with the most authentic product possible.  In the process, Sherayko has become recognized as historian and author, appearing in numerous Wild West Tech episodes for the History Channel and as technical consultant and supplier to both the History and Discovery Channels.

His first book, Tombstone: The Guns and Gear is lauded in Flayderman’s Guide to Antique Weapons as one of the 100 books every collector should have on their bookshelf, the book grew out of his work on the Western film classic, Tombstone.  Peter researched the weaponry of every character as he designed the firearms he provided.

His company Caravan West Productions coordinated the saddles and the Buckaroos, and Peter portrayed the character Texas Jack Vermillion, one of his better known roles.

The Fringe of Hollywood is his second adult nonfiction book. The taped version of his one-man show, Cody…An Evening with Buffalo Bill was performed in a chataugua and was among the top finalists in the Santa Clarita International Film Festival when produced.

He also released a CD At Your Service and hosted Varmint Media’s The Guns of Billy the Kid.   The State of Nebraska awarded him the Buffalo Bill Award for Achievements in Family Entertainment.