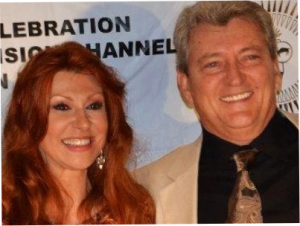 Lenore Andriel (pictured with producing partner Steve Doucette) is one of those rare spirits who, if you are lucky enough, you get to encounter at least once in a life time. Creative, talented, hard working, dedicated, inspirational, optimistic and a good loyal ‘do unto others’ friend. I am lucky enough to count her as a friend, as well as a guest on my show.

If you have not already listened to her on my show you will want to. I adore Lenore, and I know you will too!  Use the link below to listen to our most recent discussion together:

We began the exploration about her movie ‘Yellow Rock’ due to our mutual friend Director, Musician, Peter Foldy who provided us  an introduction.

Lenore wrote with co-writer Steve Doucette. She produced, Steve and Anthony Lawrence were executive producers,  along with Nick Vallelonga, who also directed, Daniel Veluzat and others a fascinating feature film. The movie stars Michael Bien, James Russo, Lenore, and Michael and Eddie Spears among others.

The film has been distributed Worldwide and won 18 Awards, including the prestigious “Wrangler Awards”, in every category from the National Cowboy and Western Heritage Museum, in Oklahoma. Lenore personally won her bronze “Wrangler” for Producing and “Best Picture” with her partners Steve Doucette, Daniel Veluzat, & Nick Vallelonga, as well the “Best Screenplay” with her partner Steve Douctte. She also won “Best Actress” Starring in the film, alongside her Co-Stars Michael Biehn, James Russo, and Michael & Eddie Spears.

She is in good company, since “Wranglers” have been awarded in the same categories, to Clint Eastwood (for “Forgiven”), Kevin Costner (for “Dances With Wolves”), and Annette Benning for “Open Range”. She also won in the same categories from many film festivals across the country, including the Red Nation Film Festival, Lake Arrowhead Film Fest, and the Native American Film & Video Fest of the Southeast, to name just a few.

The show on Thursday 8/7 with Lenore is one of many shows we have done on ‘Yellow Rock’. I’ve discussed the movie with Nick the director, Lenore and Steve, Daniel Veluzat of Veluzat Motion Picture Ranch, producer and location liaison, Catherine Ellhoffer producer and wardrobe supervisor, Peter Sherayko, props and Western consultant, Randy Miller, composer and orchestra leader, and both Michael and Eddie Spears, Native American actors and consultants.

I was so pleased when Lenore agreed that we could explore making and marketing Yellow Rock from a variety of vantage points so listeners could learn from each what goes into producing and releasing a independent feature film. We continue this exploration with Lenore and will also have other quests coming up who are new as well as returning quests.

All of the previous interviews are available at the archives in the INTERVIEW blog at Rex Sikes’ Movie Beat any time 24/7. Use this link to go to the archives  http://www.rexsikes.com . They are also available at blogtalkradio and at Itunes as podcasts for free.

Listen and enjoy all the discussion I have with professional filmmakers, there are over 400 hours recorded, especially these discussions with the fine people on ‘Yellow Rock’.

When shows record live you can join other listeners in the chat and ask questions of my guests.

Lenore is a fountain of energy and information. You are going to want to listen to the show whenever you can. Listen to all the shows on ‘Yellow Rock’. AND Stay with us as we continue to discuss important topics in the future. Lenore will be returning and there will be visits from past guests and new guests too.